This tender, celebratory loaf of apple butter and date challah is the perfect way to showcase homemade preserves and California Dates.

I have always loved the idea of a filled or stuffed challah, but until recently, I’d never made one. I’d gotten it into my head that it would be a hard thing to execute and that it might be beyond my skills. But when the folks from California Dates got in touch and asked if I had any new ideas for them, I suggested a loaf of challah filled with apple date butter and bits of whole dates. They loved the idea and so I was forced to confront my hesitations.

I used my standard challah loaf dough and once it had finished the first rise, I divided the dough into four equal parts. Using a rolling pin, I pressed each piece into a long rectangle (the trick here is to roll without using any flour, so that it sticks to the counter a little. That makes it easier to stretch). Then, I spread a thin layer of apple date butter across that portion (leaving a a small margin across the top so that I could seal it again), dotted it with dates, and carefully rolled it into long snake.

I repeated that rolling, filling, and rerolling until all four portions were complete. I wove it into a round loaf (this blog post has a good tutorial). I was careful to leave a little space in the center so that it didn’t get too dense in the middle once the loaf was finished rising.

When the loaf was formed, I gave it the first of two egg washes. Whenever I make challah, I paint it twice with an egg wash. The first goes on before the second rise, to help prevent it from drying out. The second wash goes on just before baking. The second coat fills in any gaps that formed in the wash and ensures a really glossy surface.

Baked at 350°F for 40 minutes (don’t rely just on time, it is done when an instant read thermometer inserted in the very center reads at least 190°F). The finished loaf is so shiny and impressive. It’s lovely fresh, or toasted the next day. I froze some in order to turn it into french toast on an upcoming weekend morning. 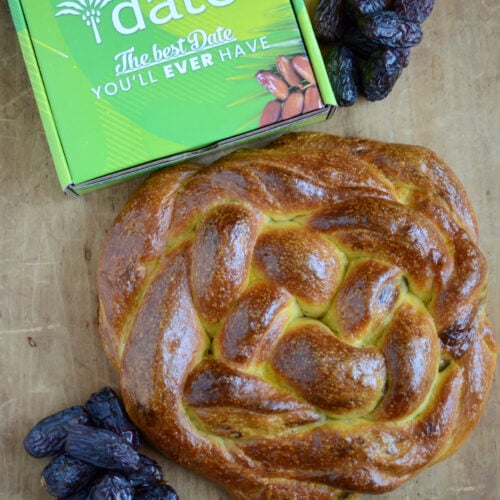 Disclosure: This is a sponsored post. California Dates provided the dates you see here, and provided additional compensation to cover time and ingredients.